Review in Artforum March 2011 of the two exhibitions by Stansfield /Hooykaas in Glasgow, Scotland

Book "Revealing the Invisible, The Art of Stansfield/Hooykaas from Different Perspectives 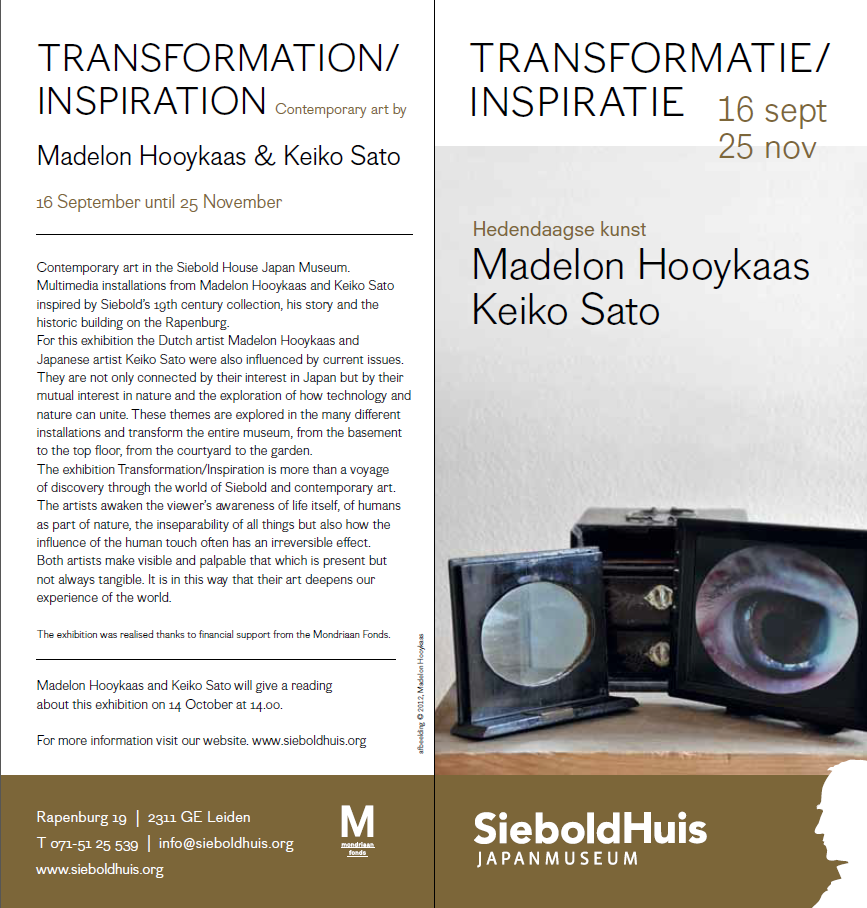 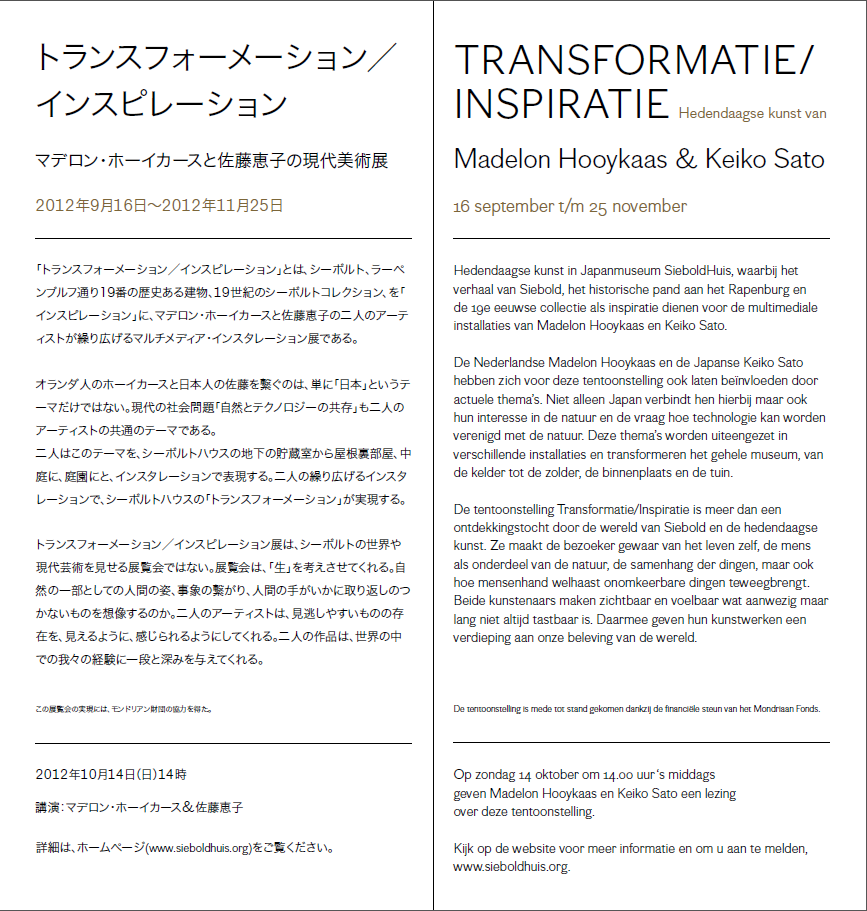 The website is part of the exhibition:
'The tree. In nature, culture and religion', Museum of Religious Art, Uden, The Netherlands, June 16- November 11, 2012

The website is commissioned by the Museum of Religious Art, Uden, the Netherlands with the financial support of the Innovation Fund for Culture of the Municipality of Uden
Advice and production: Madelon Hooykaas
Technical support: Jaap van der Kreeft, Toxus
Idea and design are partly realised through an earlier initiative of the Wishing Tree website made for the Center for Art and Technology at Northwestern University. January - May, 2002
Concept: Stansfield/Hooykaas
Realisation: Rodrigo Cadiz and Brian Sarfatty in collaboration with Stansfield/Hooykaas
Special thanks to: Annette Barbier, Marlena Novak, Heiner Holtappels and Gaby Wijers

AUDIO SCULPTURE HEARING VOICES AT BIENNALE DE QUEBEC The audio sculpture "Hearing Voices II' (1994) by Stansfield/Hooykaas has been selected for the Biennale de Quebec/ MANIFESTATION INTERNATIONALE D'ART DE QUÉBEC. The exhibition will be at l'Espace 400e in Quebec City from May 3 till June 3 2012 curated by Nicole Gingras.
http://www.manifdart.org/manif6/en/lieu-central

On Sunday March 25th, the Ives Ensemble performs for the third time in De Duif, the famous church in Amsterdam. This time two Dutch premieres of the English composer Laurence Crane.

OPENING HOURS
From the 12th of June until the 3rd of July 2011,
daily from 11am - 5pm,
also on Sundays and on holidays.
On Friday the 17th of June the exhibition closes at 1pm.
Admission is free.
OPENING
Thursday the 16th of June at 7.30 pm.
Hadassah de Boer (TV-presenter) will interview people from
different religious traditions about their choice of a video artwork.

On March 3, 2011 The Tempory Stedelijk 2 opened with among others the exhibition TV as… curated by Bart Rutten.

In this exhibition the medium television is shown on different levels. The audio-video installation 'Shadow Pictures…..

from the Museum of Memory II(1986) by Stansfield/Hooykaas is also shown here.

Review in Artforum March 2011 of the two exhibitions by Stansfield /Hooykaas in Glasgow, Scotland

Book "Revealing the Invisible, The Art of Stansfield/Hooykaas from Different Perspectives

'The work of Stansfield/Hooykaas is a celebration of the movement or flow of life. […]
In fact it is the miracle we experience every day and that we rarely stop and think about.'
Janneke Wesseling (in 'Revealing the Invisible')

the very latest audio¬visual technologies and innovations. Their films, sculptures and installations

are about space and time: the cycle of the seasons, the tides, and natural elements such as radio

waves and magnetic fields. In nearly all their work they explicitly refer to the earth and nature.

The two artists believe that technology and science are not at odds with art, but are a part of it.


In 11 essays, international authors reflect on the work of Stansfield/Hooykaas. The duo's oeuvre

comprises 150 works; its many layers intrigue the viewer.

and unexpected angles, making 'Revealing the Invisible' a unique voyage of sensory discovery.

The Art of Stansfield/Hooykaas from Different Perspectives

of the seminal visual arts duo Stansfield / Hooykaas in a series of video, sculpture,

Street Level Photoworks and CCA. The artists are considered pioneers in the field of

video art with their work influencing many multimedia artists today.

In their installations they developed unique associative principles between images,

words and sound. Their work is about space and time: the tides, the cycle of seasons

and natural elements of physics such as radio waves and magnetic fields. In addition,

they use video and photography, combined with materials like stone, aluminium, glass,

phosphorus and water. In almost all their work, they refer explicitly to the earth and

nature, and spirituality is part of their life philosophy. Although Elsa Stansfield died

unexpectedly in 2004, Hooykaas has continued their oeuvre in new work, some of

which is included in ‘Revealing the Invisible’.

Further Information on the Artists

seventies. The background of both artists included film and photography, subjects which eventually led them into the making of video

tapes and installations. Their first video works were of a distinctly conceptual nature, whereby the investigation of characteristics

of the - at that time - new artists’ medium, played a prominent role. Their work places strong emphasis on factors such as ‘time’

phenomena and the elements.

The year 1975 marked the beginning of their productive partnership with video in an exhibition‘What’s It To You’, a two screen

installation made for the Third Eye Centre (now CCA) in Glasgow. Their final installation as a living collaboration was at Centrespace

at Dundee Contemporary Arts in 2004 where they exhibited ‘Day for Night’, the results of a residency at the Visual Research Centre.

After the death of Stansfield in 2004, Hooykaas continues to create visual work in the spirit of their collaboration.

The practice of Stansfield / Hooykaas is very well known internationally and their works have been exhibited inSydney (Biennale),

Kassel (Documenta) and London (Whitechapel Gallery), and their work is included in the collections of the Stedelijk Museum

(Amsterdam) and the Museum of Modern Art (MoMA) in New York.

The book is in English and is available at Street Level and Aye Aye Books at CCA.

For details of accompanying events at both venues please visit:

A dance performance by Leine & Roebana touring in the Netherlands from January 14 till March 27, 2009.
Premiered in Breda, The Netherlands on January14, 2009
Light object/stage set by Madelon Hooykaas
See : http://www.leineroebana.com